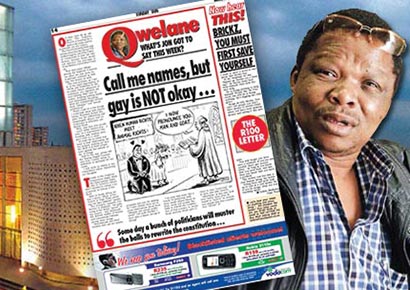 After almost a decade, Jon Qwelane has been found guilty of hate speech and of violating the Equality Act.

On Friday, in a case brought by the SA Human Rights Commission (SAHRC), the Johannesburg High Court ruled that Qwelane’s 2008 Call me names, but gay is not okay article amounts to hate speech.

The court found that his statements were “clearly hurtful and harmful and had potential of causing harm”.

In a major development, Qwelane’s attempt to challenge the constitutionality of the Equality Act’s hate speech provision was also dismissed, with costs.

He was ordered to make an unconditional apology to the LGBTI community, negotiated and settled between the parties in 30 days, which must be published in the Sunday Sun.

Activist Melanie Judge, who was at the judgment, said the court’s decision “is a victory against all forms of hate speech in South Africa”.

In his article, published in the Sunday Sun, Qwelane suggested that homosexuality was similar to bestiality, said he supported Robert Mugabe’s homophobia (which includes calling gays and lesbians “worse than pigs and dogs”), and urged politicians to remove the sexual orientation equality clause from the Constitution.

A cartoon alongside the article depicted a man marrying a goat in church, further enforcing the idea that same-sex relationships are akin to bestiality.

During the trial, the Psychological Society of South Africa (PsySSA) led evidence on the nature and extent of the harm caused by homophobic hate speech and its impact on LGBTI people and society at large; and on the importance of the hate speech provision of the Equality Act to curb verbal and physical violence.

In 2011, an Equality Court ruled that the article “propagates hatred and harm against homosexuals” and ordered Qwelane to apologise to the gay community and to pay damages of R100,000 towards an LGBTI rights group.

He, however, had the ruling rescinded on a technicality. The SAHRC re-filed the charges, leading to today’s ruling.